WE HAVE BIKES! Check out our listings to see what is currently in stock.

For 48 years, Blue Wheel Bicycles has been the perfect fit for Charlottesville’s bike community.  Our expertise is in bicycle repair, including mountain, road, hybrid, gravel, cyclocross, and e-bikes.  Though we specialize in the repair of bikes from Specialized, Santa Cruz, Scott, Jamis, and Tern, we gladly repair all brands of bike with the same level of care.  Everyone at the shop is a passionate cyclist who can help outfit you with the best equipment and apparel to suit your needs.

With the partnership, Blue Wheel has an expanded inventory of bikes and accessories, while maintaining Charlottesville-based ownership and operation.

Rocktown is Shenandoah Valley’s premier bicycle shop, priding itself on superior service and expertise of the vast network of cycling-friendly roads and trails around Harrisonburg.  Learn more about Rocktown. 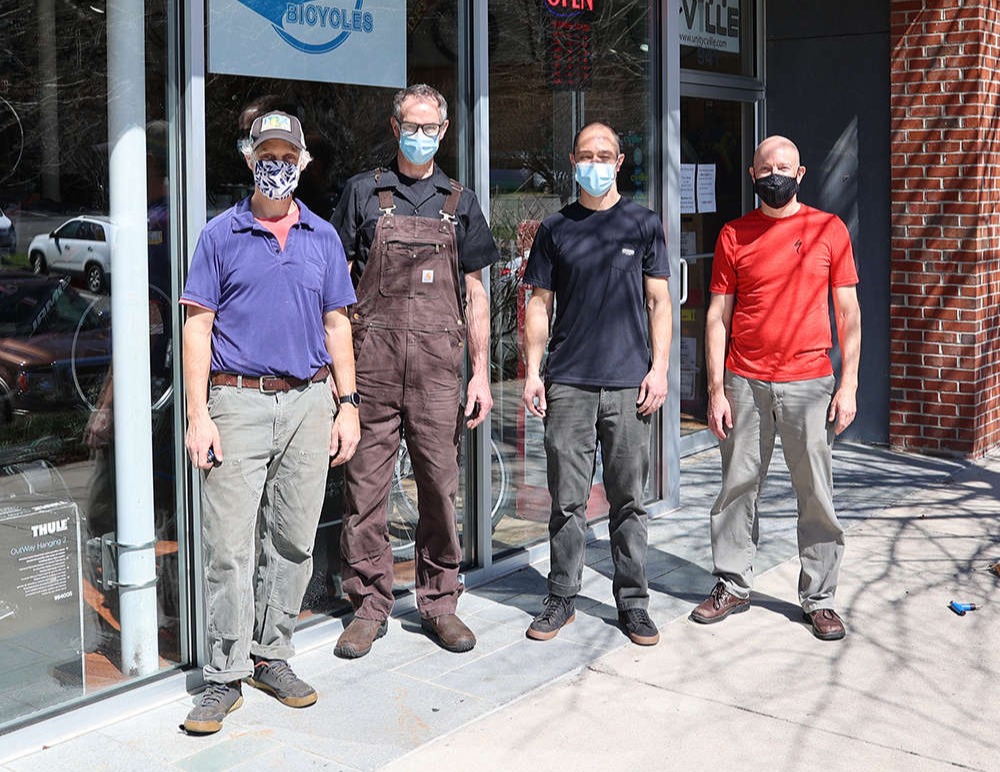 A prolific mechanic whose friendliness is matched only by his skill, Scott Paisley logged his first Blue Wheel shifts in the summer of 1980, commuting by bike from Nelson County.  Since then, he has wrenched around the world, and spent years working on the manufacturing side of the bicycle industry.  Scott guesses he built over 500 frames - including his own Paisley line of custom frames - before returning to Blue Wheel full time. In addition to being a walking encyclopedia of bicycle knowledge (and awesomely bad jokes), Scott is a cyclocross masters national champion who loves to explore the gravel roads around Charlottesville.  Scott may have missed his true calling as a music critic for obscure British prog rock, but we’re all thankful he chose bikes instead.

Charlottesville’s most sought-after mountain bike mechanic is also its nicest. Ex-pro racer Paul Buschi has earned podium finishes at premier races like the SM100 and Sea Otter, but he’d rather tell you about his favorite places to ride and eat!  He’s a true student of the bike, constantly learning the intricacies of new bike technology, all in the name of helping you find a bike you love to ride.  Paul is our spiritual guide in the shop, and he leads by example - work hard, have fun, be nice, and spend as much time as possible taking family trips in a sweet van!

After many years of loitering in the shop, Mark joined Blue Wheel in 2020, helping out in the shop on his day off.  By the end of the year, he left his job in the music business to join the team full time.  Mark enjoys the challenge and camaraderie of cycling, and loves to help cyclists at all levels.

In 2004, Ken partnered with his friend Jason Berry to launch Gripped Films. Together, the two produced their first award-winning documentary, Off Road To Athens, which followed 8 Olympic cycling hopefuls as they raced for selection all over the world. After producing two more documentaries about cycling, 24 Solo and Chasing Legends, Ken began to pursue his childhood dream of opening a bike shop.  With his oldest son riding for the US Mountain Bike national team, and having helped launch the Virginia High School Mountain Bike Team while also promoting mountain bike and cyclocross races, the time to open Rocktown Bicycles seemed just right.

A Brief History of Blue Wheel

In 1973, Bill Gray opened Blue Wheel in UVA’s Corner District. For 33 years, we sold, fixed and chatted about bikes from a little blue building at the end of Elliewood Avenue.  From the 1980s through his retirement in 2020, Roger Friend expertly guided the shop through the challenges of a competitive local market and the internet sales boom.

Roger, along with his wife Ruth Stornetta, left an indelible impact on the cycling community.  In addition to founding and operating the iconic Jefferson Cup Road Race in Albemarle County, both are tireless advocates for cycling accessibility in Charlottesville.