WE HAVE BIKES! Check out our listings to see what is currently in stock. 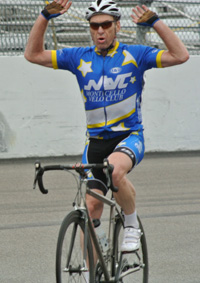 Racing on Richmond, Virgnia's .75 mile NASCAR track, the Richmond International Raceway, Roger won the 50+ race on Sunday May, 6th.  Small by NASCAR standards, RIR is the third smallest track in  the country, it's still big by bicycle standards.  The fields had plenty of room to jockey for position and use the banking to accelerate and attack the field.  Roger used this tactic to start high and cut below the field and gain a 15 sec advantage that he managed to stretch to 30 seconds by the end for the solo win.  "Racing on a NASCAR track is a unusual blend of road and track bicycle racing tactics," said Roger. "You've got the banking like a bicycle track, but really big wide open straight aways. Attacking off the banking required a big burst of power and then maintaining the advantage took a lot of sustained power. I was really pleased with my new Bontrager RXXXL shoes that put all that power straight into the pavement at RIR"