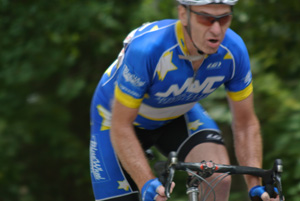 "It was a real hard day at the office," said the exhausted rider.  "The hill on the course was steep enough to really take it out of you lap after lap.  After racing my Madone with Shimano Dura Ace Di2 last week, I went back to my bike with the mechanical Dura Ace this week.  I really missed the quick, low effort shifting each time up the hill today.  This may be the end of the mechanical shifting era for me."