All right campers, we're finally getting into the dog days of Summer here. One of the lesser known details in the care and maintenance of your bike is the remarkable amount of sweat that we all generate. I know that this comes as a real surprise to some. A great deal of that sweat gets trapped under your handlebar tape. Some of us have more corrosive sweat than others—really, some of the nicest people I know are really corrosive underneath. When that sweat gets under the bar tape, it can react violently with the handlebar itself as you can see in the picture below: 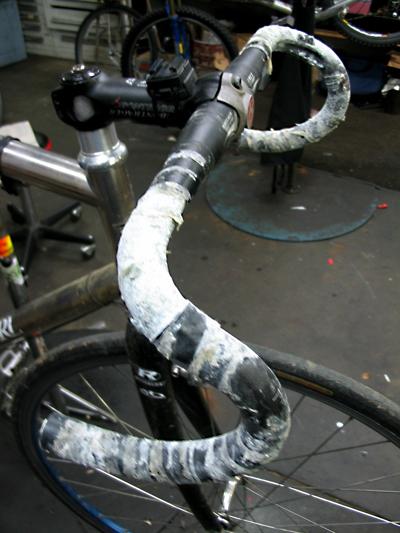 I know that we are all trying to save money wherever we can, but new handlebar tape is less than $20. Replace your tape once a Summer and carefully inspect the handlebar for corrosion and you will avoid the greater expense of having to replace that handlebar, or even the much greater expense of going to the hospital when the corroded bar breaks! When you do re-tape the bar, look not just for the obvious corrosion, but clean the handlebar and look for any less obvious pitting that may have occurred. The greatest corrosion is usually in the zone where the brake/shift levers were attached as they will trap a lot of moisture at the top of their assembly. A bar that shows signs of pitting or any depth to the corrosion should be replaced immediately.

While you are on the sweat kick, take a look at all of the cable routings. Especially check out the brake cable housing ends since these more often stop directly into a frame fitting rather than into a threaded adjuster. The metal housing end caps will often corrode themselves permanently into place if not periodically removed and replaced. The frame fitting itself will begin to corrode and, if left unchecked, the frame itself can be compromised. The threaded derailleur adjusters will need to be periodically removed and the threads re-greased as well. The road brake calipers have a threaded adjuster built into the arm which receives the housing and this piece will also corrode. A little dab of grease in the socket for the housing and a little grease on the threaded fittings goes a long way to combat these problems.